Insight  from this post:
Our reliance on historical concepts and dated utility business models has masked the shift in the primary driving force for renewable generation, from policy obligations to least-cost generation. As a result, past forecasts have systematically underestimated the penetration of low-cost wind and solar PV. Yet, 2016 was the first year in which solar and wind net additions worldwide exceeded coal and gas.

Solar power was once so costly it only made economic sense on a spaceship. As costs went down, volumes went up, attracting innovation and driving costs further down, which drove volume further up, which caused more innovation and drove costs further down… and so on. The spaceship has come down and has now landed on Earth — no wonder that this new reality seems alien to many. Close to earth, installed capacity of wind turbine farms is even larger than solar and follows a similar virtuous cyclone, albeit at a more moderate pace, and the latest purchase agreements show that it is still the cost leader (but barely). 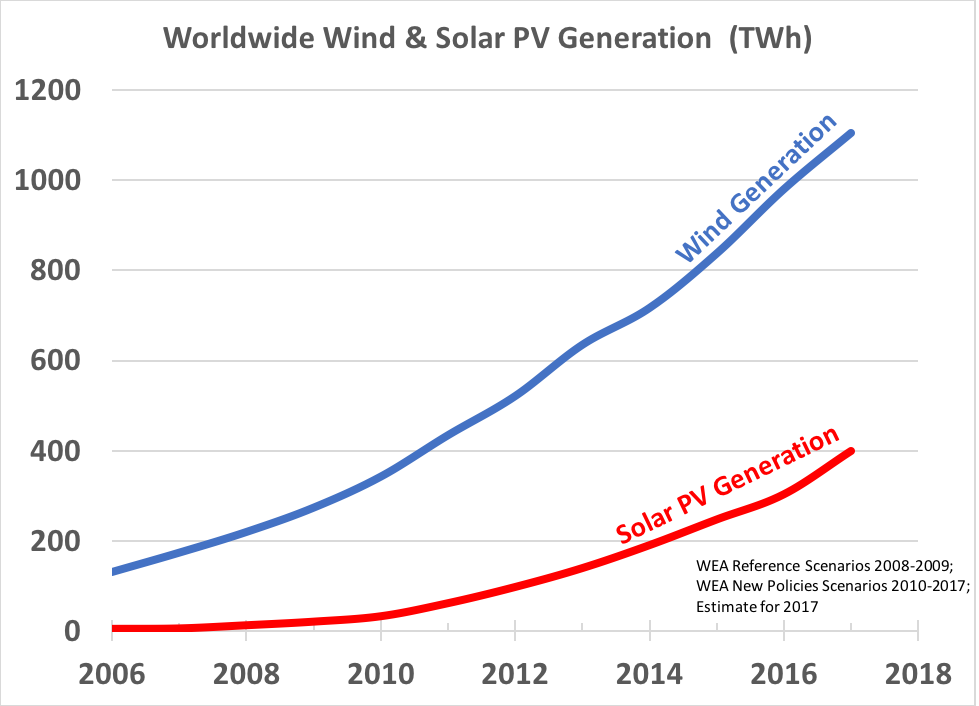 While this growth in renewable capacity is impressive, it masks that renewables are still relatively small. Half of electricity generation worldwide is from coal, oil and natural gas, and another 10% is from nuclear[i]. The share of the electricity generation was in 2017 only about 4.4% for wind and 1.5% for solar. From a small base, those percentages are, however, increasing quite rapidly: 2016 was the first year in which the net capacity additions of solar and wind net exceeded coal and gas.[ii]

While residential solar PV has attracted a lot of attention, utility-scale solar generation is far larger. In the United States, utility-scale solar PV represented 60% of the installed capacity and 69% of the electricity generation in 2017.[iii] In Ontario, 80% of the solar PV capacity resides in MW-scale systems, while residential capacity (from MicroFIT contracts) is only 8% and commercial capacity (from FIT contracts) is another 12%.[iv]

The existence of a virtuous cycle driven by innovation and industry investments rather than government policies has not always been recognized, but it is becoming clearer. For example, the International Energy Agency (IEA) publishes a yearly World Energy Outlook (WEO), forecasting, among other things, electricity generation for the next 20 or 30 years. The Outlooks implicitly assume that government policies are the main drivers of the evolving generation mix in the Outlooks. For example, WEO2010 states that the “future of renewables hinges critically on strong government” and that “the scale of government support [for renewables] is set to expand as their contribution to the global energy mix increases.”[v] Policies certainly have had a major influence in the European Union and in other areas, like Ontario, that subsidized renewables with instruments such as favorable feed-in tariffs. However, the IEA assumption that policies are the driving force may have contributed to a lag in recognizing the rise of technology and business innovation and the resulting cost reductions as the new driving forces, like what we are seeing now in renewables. As a result, past IEA generation Outlooks broadly diverged from actual wind and solar PV generation (see Figure 2). Until 2010, IEA wind Outlooks and actual generation diverged steeply. Starting with WEO2010, as wind generation reached 300-400 TWh, IEA Outlooks got less inaccurate. As for solar PV, WEO2017 still shows some divergence. However, solar generation is now at the same level as wind was in 2010 – perhaps this is a sign that the current solar PV outlook is getting more realistic. 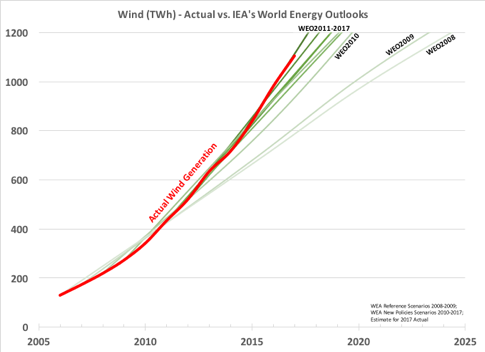 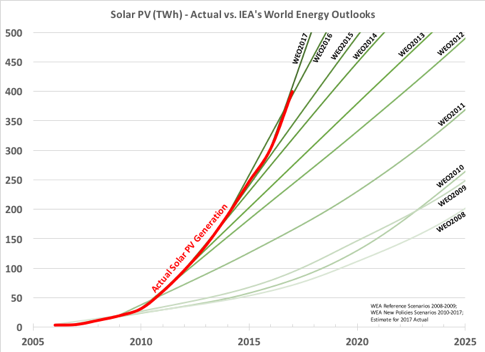 The IEA is not alone in having poorly forecast the rise of wind and solar generation:

Traditional wisdom is a poor guide in forecasting during a technology shift, as the case now with wind and solar power. Forecasters relying on historical policies and industry practices remain oblivious to the confluence of performance improvements, supply chain efficiencies and business innovations that arise during a technology shift. They assume that the latest deviation from past trends is just an exception and they are surprised when costs fall quickly and volume increase faster than expected.

It is not to say that policies are not important. In fact, policies have been the driving force behind the renewable growth in pioneering European countries (see Figure 3) at a time when wind and solar PV were considerably more expensive than coal and nuclear generation (more on costs of wind and solar PV later). However, the USA also saw significant growth without consistent policies at the federal level.

Government policies may also dictate the types of renewable plants being built. For instance, public tenders will tend to favor large corporations and cement the market power of oligopolies, while feed-in tariffs favor private investors, energy cooperatives and small businesses.[ix] However, while public tenders may be justified on the basis that utility-scale plants are currently more cost-effective than distributed systems, such a policy could decrease public support and ultimately slow down adoption of renewable generation in the long run.

Furthermore, some governments have policies, including direct and indirect subsidies, regarding generation from fossil sources, and those policies are delaying the tipping point when renewables become cost effective in those jurisdictions.

[ix]       Hans-Josef Fell, “The shift from feed-in-tariffs to tenders is hindering the transformation of the global energy supply to renewable energies“, Policy paper for IRENA, July 2017.