Traditional utility wisdom in Canada is that customers are satisfied with the current level of reliability and that improving reliability would only increase costs and push rates up.

The new reality of electric utilities upends this traditional wisdom. 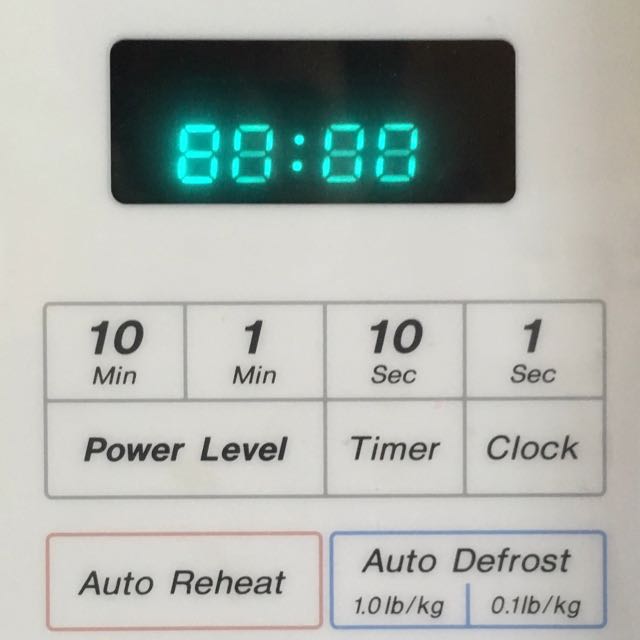 Even a short interruption resets common electronics, like my microwave oven above. This gave birth to the “blinking clock” syndrome, a stark reminder to residential customers that an outage occurred and that their utility has failed them – again. (Photo by the author)

ENMAX, when justifying its distribution automation projects within the performance-based regulation scheme of Alberta, based its analysis on the cost of sustained and momentary service interruptions, with the values for its various customer classes as shown in the table below.[ii]

The table is interesting for two reasons:

This situation is likely to get worse with widespread customer-owned distributed energy resources: owners of distributed energy resources actually lose money during power disturbance. Distributed generators or resources may be thrown offline often for minutes, for safety reasons and to protect the equipment. This results in loss revenue for owners of distributed generators selling back to the grid, or additional costs for those who were offsetting power otherwise purchased from the grid. Overall, the percentage of time when distributed generators are offline because of service interruptions is relatively small, and so is the unsold energy or the energy additionally bought by the customers while waiting for generation to come back online. However, those interruptions may also cause power generation or grid support contracts to be broken, which may carry penalties. Customers may also have to pay additional demand charges, often a large share of the utility costs of business customers.

Service interruptions also cost money, to utilities which is ultimately paid for by customers through higher rates – another key determinant of customer un-satisfaction. First, service interruptions cause power flow and voltage fluctuations as distributed generators trip and come back, and loss of generation and dynamic resources for the grid operator. In an electric network relying partly on distributed energy resources, service interruptions mean additional complexity to maintain stability of the grid and higher costs for network operators who then have to rely on backup resources. Service interruptions even increase operating costs. Fuse saving does not always work: on average, about half of fuse replacements have unknown causes or causes that should normally have been eliminated by fuse saving, such as animal contact.

By the way, the telecom industry also went through a redefinition of what customers mean by quality. It used to be that the main quality measure was voice sound quality during a call[v]. However, voice sound quality has actually gone down in the last decades – the rotary black phone in your grandmother’s old house sounded better than your new iPhone. Nowadays, customer satisfaction is driven more by the convenience of mobility and the possibility of easily doing videoconferencing or multiple parties calls.

In summary, with increasing dependence on reliable power for modern way of life, plus distributed generation earning revenue for customers, outage frequency will become a more and more important factor for customer satisfaction. All this being said, there is hope – new smart grid approaches and protection strategies can result in fewer service interruptions, leading to higher customer satisfaction and lower cost for utilities.

[i]       SAIDI means System Average Interruption Duration Index. SAIDI is the average duration of all the outages seen by customers over the course of a year. In Canada, only interruption durations of more than 1 minutes accrue to SAIDI. Interruptions of less than a minute are considered momentary and do not count toward SAIDI.

[iv]      Fuse saving is an electrical protection strategy used on many distribution feeders in Canada. The objective is to avoid that fuses installed on lateral taps blow for a non-persistent fault, such as an animal contact or a lightning strike. With fuse saving, a mainline or station a circuit breaker or recloser is used to operate faster than the lateral tap fuses. A few seconds after an initial fault, the breaker reclose, re-establishing power. If the fault is non-persistent, power will be restored. If not, it may retry later. If the fault is persistent, the breaker will eventually reclose and let the lateral fuse blow, isolating the fault. Because most faults are non-persistent, fuse saving prevents needless fuse blow, avoiding sustained service interruption for customers on the affected lateral. The main disadvantage of fuse saving is that all customers on the circuit see a momentary interruption for lateral faults.

[v]       The quality of a call is given by its Mean Opinion Score (MOS), a subjective measurement where listeners sit in a quiet room and rate a telephone call on a scale of 1 to 5. It has been in use in the telephony industry for decades and was standardized in an International Telecommunication Union (ITU) recommendation.

On February 21, 2018, I presented at the annual T&D Corporate Sponsors meeting of the Canadian Electricity Association. This year, the formula what similar to the “dragons” TV program, with presenters facing “tigers” from utilities. They asked me to go first, so I didn’t know what to expect, but it went well. Or, at least, the tigers didn’t eat me alive.

The theme was a continuation of my 2017 presentation, this time focusing on what changes utilities need to effect at a time of low-cost renewable energy.

On September 29, I was asked to participate on a panel titled “Evolution of Energy Generation and Distribution in Canada’s Smart Power Grid” at the Innovation 360 conference in Gatineau, Québec (http://innovation360.ca). Here is the essence of what I contributed.

By definition, in an electricity network, energy consumption plus losses equal electricity generation. This must be true at any point in time, or protection systems will shed load or trip generators.

There are 4 ways to balance load and generation:

1) Traditionally, dispatchable generators that can easily ramp up or down were tasked to follow the load. Big hydro plants and natural gas generators are particularly good at this. However, we are running of big hydro opportunities, and natural gas are sources of greenhouse gas emission, contributing to global warming.

2) Another way to balance load and generation is to interconnect with neighboring network that may not have the same load profile. Today, all of North America is interconnected in some way. However, building transmission lines is a lengthy process that typically faces major local opposition. As a result, most transmission lines run at capacity during peaks, weakening the bulk transmission system as the Northeast blackout of 2003 demonstrated.

3) In the last couple of decades, we have started to control load, like turning off air conditioning units by pager or getting large industrial like smelters to go offline for a couple of hours during a major peak. Time-of-use or market pricing are also attempts to have loads better follow available generation capacity. However, much of the conservation focus thus far has been on energy efficiency, not peak load reduction.

4) Very recently, energy storage has been getting attention. Traditionally, the only utility-scale storage technology available was pump-storage, like the Sir Adam Beck plant in Niagara, but few of those plants are possible, and they are not efficient. Going forward, batteries, either utility-scale or distributed storage, will grow, although for now utility-scale batteries are MW-class, when hundreds of MW or GW are needed.

Balancing load and generation is also becoming more and more difficult. On one hand, consumption is getting peakier, partly due to side effects of some energy saving programs, like turning down thermostats at night in the winter, and then turning them back up in early morning, just in time for the morning peak. On the other hand, wind and solar generators are replacing fossil generators, adding unpredictability to generation and taking away controllability, thus requiring even more balancing resources.

Integrating renewable into the grid is not only causing balancing problems. It also creates voltage management and protection problems. Those are solvable, but significant, engineering problems that require expensive upgrades to the electricity grid.

As a society, we have been subsidizing fossil fuels. Clearly, going forward, we will need to greatly invest in the grid if we want to limit the predicaments of global warming for our children and grand-children.